The roles and responsibilities of the co-driver or navigator range from pre competition all the way to post-competition.
These range from planning the trip, search and book hotels, make entries in the evidence to dispute … to even manage the website with which team activities are promoted or layout dossiers for finding sponsors. The co driver will do whatever he/she can in the amount of time he/she has and even help with the luggage of the driver during the days before the race.
As this part of the roles and responsibilities are usually to be arranged with the team, we will focus on the co-driver’s roles in the competition.
As the saying goes, “A co-driver has never won a rally, but can definitely make you lose one”. 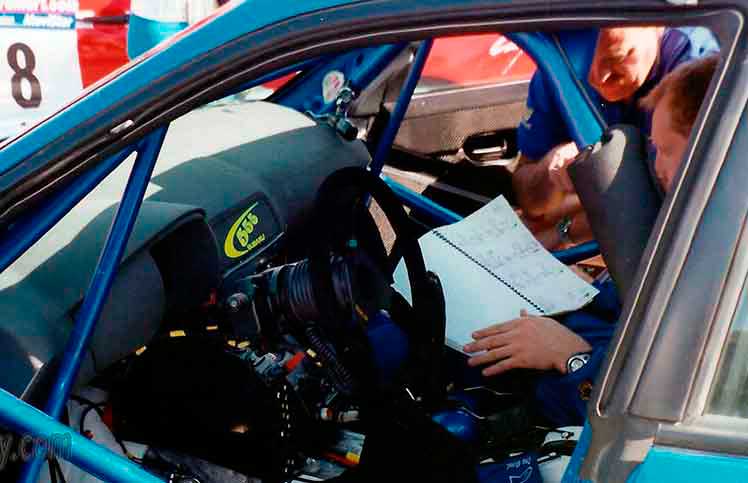 If the rally went well and once the finish is reached, to attend the awards ceremony.

– Although the rally does not always end with a win, it is important to be aware of the published final classification in case there is something unsatisfactory. Only then you can put the subsequent complaint in time (according to the regulations of the specific rally).
Depending on your results or random draw you might need to attend scrutineering at the end of the rally as well.

– If unfortunately you have a crash or retirement, you as a navigator must run back on the stage to signal other cars as a warning of a crash ahead. Navigators must have an SOS/OK Board which they must display to passing cars. OK if they don’t need any attention and SOS if there is an injury or another reason for the following cars to stop.

After all this you can imagine the joy that ‘showers’ you after the race.
All these roles will be described in further detail later in “a rally from start to finish”. 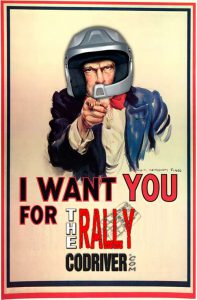 Thousands of co-drivers around the world love their profession to such an extent that it takes precedence over many other things. We need persons who want to share the secrets of co-driving through our siteweb and social networks. Teach the future co-drivers. Show how exciting our profession is.

Following the success of our spanish website we are launching an international version in order to reach the rest of the world. With your help, english speaking co-driver enthusiasts, we aim to provide a high quality reference point for our passion. Thus due to our limited english proficiency we would love to have your help reviewiewing the translations of our original content and adapting and improving them to reach the whole co-driving world.

Is english co-driving enthusiasts what we need.

I WANT YOU FOR THE RALLY CO-DRIVER.COM 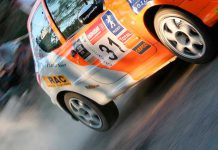 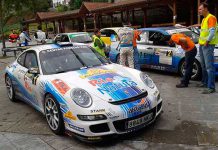 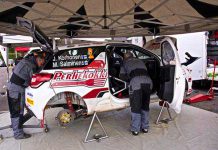